And the 2008 Ebenezer Award goes to… FGCU president ‘was naughty, but then he got nice 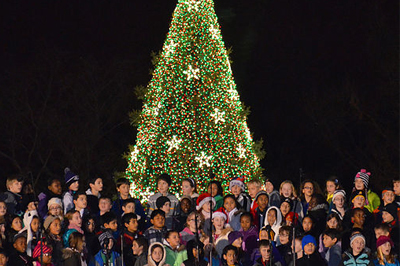 Florida Gulf Coast University President Wilson Bradshaw has been named the 2008 winner of the Ebenezer Award by Becket.

Bradshaw is getting the less-than-dubious honor for first canceling all holiday festivities and decoration at FGCU and then reversing his decision after getting much unwanted national attention and criticism.

The Ebenezer Award is given to an individual who most personifies the spirit of Charles Dickens’ Ebenezer Scrooge, according to Becket officials.

“In a normal year, Dr. Bradshaw would have won this award for his miserly Christmas spirit,” said Kevin “Seamus” Hasson, founder and president of Becket. “But we are even more pleased that after prodding — from the modern-day ghosts of Christmas Past, Present and Future — Dr. Bradshaw, like Ebenezer, was willing to embrace the holidays and allow his staff and students to celebrate Christmas, Chanukah or Eid without fear in the public square.”

Bradshaw will receive a Christmas gift basket of holiday goodies, including a DVD of “It’s A Wonderful Life.”

The first Ebenezer Award was given out in 1999 to the mayor of Pittsburgh for changing the Christmas Season to the Sparkle Season. Other winners include the city of Kensington, Md., for banning Santa Claus and the city of Virginia Beach, Va., for banning a local charity from handing out holiday turkeys.

Normally the winner received a lump of coal but Becket wanted to honor the Ebenezer Scrooge of Christmas morning, thus the small gift basket.

“Like Scrooge, Dr. Bradshaw was naughty, but then he got nice,” Hasson said.

■ The city of Pittsburgh, Pa., for eliminating Christmas from its annual Christmas Tree Lighting Ceremony, morphing the celebration into “Light Up Night.”

■ Patchogue, N.Y., for changing the name of its annual Christmas Boat Parade to the Patchogue Holiday Boat Parade.